So, I’ve never put up two posts in a day, but I was just so excited about this, that I couldn’t wait! I’ve seen fingerprint jewelry all over, but it’s usually really, really expensive, and it usually requires you to receive a kit to press your fingerprint into and then you need to send it back and then they can make it. On pinterest, I’ve seen a bunch of tutorials where they do it with salt dough and polymer clay, and I tried the salt dough and you could barely make out the prints, so thought I’d give the polymer clay a try. I mean it makes sense, because whenever working with polymer clay, I’d get my fingerprints all over it, which I’d file off after baking it. Well, it came out awesome!!! I’m obsessed….

I started off with some silver Sculpey clay (1130 Silver) 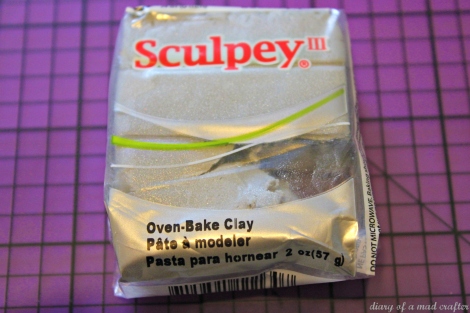 Then, I ripped off a little piece and rolled it into a ball.

I put it directly onto a piece of aluminum foil so I could stick it right into the toaster oven after I’m done, then put some more aluminum foil on top, and smooshed it down with a flat lid.

I pressed my fingertip into it.

And then had my husband press his fingertip into it at an angle to make a heart.

Then, after about 5 tries, it came out to a perfect heart, so I cut it with a fluted round cookie cutter.

Poked a hole through the top with a toothpick for my jump ring to go through, and baked it according to the directions (275 for 15 minutes).  I love my new necklace! Some people spray paint it with a metallic silver, but I think it looks fine just like this 🙂 **I actually DID try spraying it with metallic paint and I don’t know if it’s the brand, or what, but it got SO STICKY and disgusting! And still, months after spraying it, it’s still super tacky. So I wouldn’t recommend trying that!**

Until tomorrow!! (or maybe later? I can’t stop! lol)